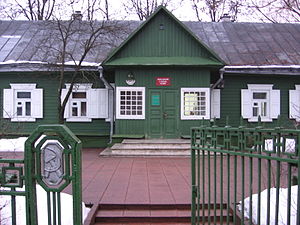 The Congress was held in this house in Minsk

The 1st Congress of the RSDLP (Russian: Российская социал-демократическая рабочая партия, РСДРП) was held between March 13–March 15 (March 1–March 3, O.S.) 1898 in Minsk, Russian Empire (now Belarus) in secrecy. The venue was a house belonging to Rumyantsev, a railway worker on the outskirts of Minsk (now in the town centre). The cover story was that they were celebrating the nameday of Rumyantsev's wife. A stove was kept burning in the next room in case secret papers had to be burnt. Lenin smuggled a draft program for the party written in milk between the lines of a book.

The Congress was convened by three major social democratic groups from different areas of the Russian Empire.

There were 9 delegates[6] to the Congress representing these three groups as well as social democrats from Moscow and Yekaterinoslav. The Kharkov socialists refused to come thinking the move premature.[7]

There were 6 sessions, with no minutes taken because of the need for secrecy; only resolutions were recorded. The major issues discussed by the delegates were merging all social democratic groups into one party and selecting the party's name. The Congress also elected a Central Committee of three: Stepan Radchenko, one of the oldest Russian social democrats and a leader of the Saint Petersburg League, Boris Eidelman of Rabochaya Gazeta and Alexander Kremer,[8] a Jewish Bund leader. The Manifesto of the new party was written by Peter Struve[9] at Radchenko's request.

The Central Committee elected by Congress printed the Manifesto and the resolutions of the Congress, but five of the nine delegates were arrested by the Okhrana within a month.[10]

The first Congress failed to unite the Russian Social Democracy, neither through the proposed the Statutes nor the Programme. A wave of police repression followed, which prevented the party from functioning as a cohesive body for several years and ushered in a period of internal schisms and dissension. Three of the delegates weren't arrested, but only because Zubatov thought they would lead him to other members.[11] It was not until 1903 that the 2nd Congress of the RSDLP was held abroad and adopted the party's Charter and Programme.