This article has, at least partially, been imported from Wikipedia. You can help Communpedia by adding original content, and removing any capitalist bias. 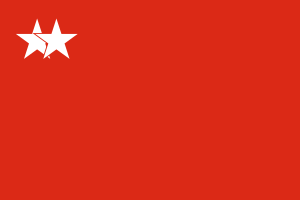 Burma Socialist Programme Party was formed by the Ne Win's military regime that seized power in 1962 and was the sole political party allowed to exist legally in Burma during the period of military rule from 1964 until its demise in the aftermath of the popular uprising of 1988.

The BSPP was established on 4 July 1962, after the declaration of the "Burmese Way to Socialism" (BWS) by the Revolutionary Council (RC) on April 30, 1962. The BWS set out the political and economic ideology of the RC which had taken over power in the military coup of 2 March 1962. The party Chairmen were:

The BSPP advocated a programme of the "Burmese Way to Socialism" which embodied both Communist and Buddhist influences. A booklet was published in January 1963 in both Burmese and English languages entitled 'Special Characteristics of the Burma Socialist Programme Party'. The booklet distinguished the BSPP’s ideology from those of both 'bourgeoisie' social democrat parties and Communist parties. The BSPP, the booklet stated, rejected the 'bourgeois' belief and practices of 'social democrat parties' that 'socialism' could be reached through 'Parliamentary methods'. (Even before the announcement of the BWS, the RC had already abolished, by decree, the Parliament that was established under the 1947 Burmese Constitution stating in effect that 'Parliamentary democracy was not suitable for Burma'.) The booklet further stated that though there was much to be learnt from the doctrines of Marx, Engels and Lenin it did not regard them as 'gospel' unlike Communists, 'especially Burmese Communists', who are 'vulgar [philosophical] materialists'.

Later in the same year the BSPP published in both Burmese and English its ideology in a book entitled 'The System of Correlation between Man and His Environment', simply known as Innya myinnya (Correlation), where both Buddhist and Marxist rhetoric were used to espouse what came to be known as 'the Burmese Way to Socialism'. Its most memorable line was borrowed from an old popular expression "One can only afford to be moral on a full stomach" which struck a chord with the people trying to eke out a living in increasingly dire economic circumstances under the rule of the BSPP, and implemented by the Socialist Economy Construction Committee (hsa sa ta ka), starting with nationalisation of all businesses, dubbed 'capitalist', across the board. In an article published in a February 1974 issue of Newsweek magazine, the Burmese Way to Socialism was described as 'an amalgam of Buddhist and Marxist illogic'. Given that it was the brainchild of lapsed Communists and their Socialist counterparts that dominated the Burmese Army after 1948 [1], it seemed a logical product of its time.

On March 23, 1964, the RC issued a decree entitled 'The Law Protecting National Unity' whereby all political parties except the BSPP were abolished and their assets appropriated. This was repealed on the day the State Law and Order Restoration Council (SLORC) seized power in the military coup of September 18, 1988.

The now-defunct 1974 Constitution of the Socialist Republic of the Union of Burma constitutionalised the BSPP’s leading role in Burmese politics. Article 11 of the 1974 Constitution stated that 'The State shall adopt a single party system. The Burma Socialist Programme Party is the single political party and it shall lead the State'.[1] This provision merely formalised what was already a fait accompli - a one-party state- since March 1964.

All government servants from all sectors including doctors, teachers, engineers, scientists, managers from the nationalised industries and businesses as well as civil administrators were compelled to undergo a three-month political indoctrination and basic military training at Hpaunggyi Central People's Services Training School, accommodated in military barracks, starting from the early 1970s. Everything was done in the name of 'the people', and everything had 'people' in its name from People's Shops to People's Parliament, with all the problems of the totalitarian state and none of the benefits seen in the Soviet bloc or China. The phrase hsoshalit athi (socialist consciousness) became a pun for Socialist friend or connection that one must have in order to get anything or anywhere. The Military Intelligence Service (MIS) and its army of informers served the function of the secret police to sniff out and extinguish any political dissent.

In 1971 BSPP was opened up for mass membership as 'a People's Party'. During the 1960s, there were three types of membership in the BSPP. The first type or tier was that of a 'friend of the Party' (Pati meik-swei). The second type or tier was that of an 'alternate or provisional membership' (Ayan pati-win lending itself to mockery as ayaan meaning reckless) and the third type was that of a 'fully-fledged' Party member (Dinn-pyei pati-win). Under the Party rules of the time once a person became a 'full Party member', unless there were extraordinary reasons such as those of ill-health one could not 'resign from the Party'. A full Party member could only be dismissed from the Party. The BSPP continued to be dominated by the military, and in 1972 more than half of its 73,369 full members was still made up of army or police personnel; Dr. Maung Maung was notably the only civilian in the higher echelons of the party.[1]

Prior to being 'transformed' from a 'cadre Party' to a 'mass Party', the BSPP held four 'seminars', the last one from November 6 to November 11, 1969.

Extraordinary Congresses of the BSPP were held in:

At each regular Congress of the BSPP starting from June 1971 to October 1985, Ne Win was 'elected' and 're-elected' by the BSPP as its Chairman. Each Congress also elected a 150 to 200 member Central Committee and in the later Congresses a 'Central Executive Committee' (roughly equivalent to that of the 'Politburo' in one-Party Communist States though the term 'Politburo' was never used) of about 10 to 15 members were elected.

A nationwide youth organization of the party was formed in 1984 known as the Lanzin lu nge. Students were required to join the organization.[2] Its counterpart in schools was the Sheizaung lu nge and they were modelled on the Red Guards and Young Pioneers respectively of China.

In November 1977 a 'purge' of the BSPP including those on the Central Committee took place. This 'schism' in the BSPP was seen as a power-struggle or in-fighting between the military faction and the 'ex-Communist' faction (mainly consisting of some ex-communist rebels who had surrendered to the government, joined and risen in the ranks of the BSPP hierarchy and their sympathizers) in the BSPP. Among the thousands that were purged from the party were 'leftists' or 'communist sympathizers'.

An Extraordinary Congress of the BSPP was held from July 23 to July 26, 1988. In his inaugural speech on July 23, 1988, Party Chairman Ne Win stunned the nation when he, 'taking indirect responsibility for the sad and bloody events of March and June 1988' (whereby many students and civilians in largely peaceful protests against the BSPP regime were shot and killed by the Military Police Lone Htein) tendered his resignation as Party Chairman. Ne Win also announced that four of his colleagues Vice-Chairman and State President San Yu, General Secretary Aye Ko, Joint-General Secretary Sein Lwin and Member of the Central Executive Committee Tun Tin, also a Deputy Prime Minister, had expressed their desire to resign. Referring to the student-led demonstrations against the government in March and June 1988 Ne Win stated that these events indicated that some people 'don't like the government' and 'the Party that led the government'. He also proposed that a nation-wide referendum be held in late September 1988 to determine whether the people preferred the one-party system or wished to shift to a multi-party system. (A translation of Ne Win's speech can be read in the July 24, 1988 issues of the Rangoon Guardian and the Working People's Daily).

The BSPP Congress accepted the resignations of Chairman Ne Win and Vice Chairman San Yu but rejected the resignations of General Secretary Aye Ko, Joint General Secretary Sein Lwin and Central Executive Committee member Tun Tin. Joint-General Secretary Sein Lwin (former Brigadier, d. April 9, 2004) was chosen and appointed as the new Chairman of the Party by the Party Congress. The appointment of Sein Lwin, who was widely perceived to be mainly responsible for the shootings and killings of more than 100 students at Rangoon University on July 7, 1962, shortly after Ne Win's coup d'etat[3], as well as the killings of students and civilians in March and June 1988, earning the epithet "Butcher of Rangoon", sparked widespread protests in the country.

The Extraordinary Party Congress of July 1988 also rejected Ne Win's call for a national referendum. The election of Sein Lwin as Party Chairman as well as the refusal by the BSPP to take steps to move towards a multi-party system led to massive demonstrations to which the military responded by shooting and killing hundreds if not thousands of demonstrators in many towns and cities across the country from August 8–12, 1988. On August 12, 1988 Sein Lwin resigned as both Party Chairman and State President. After the selection by the BSPP Central Committee of Dr Maung Maung (January 31, 1925-July 2, 1994) as Party Chairman on August 19 and later by the one-party Pyithu Hluttaw (People's Parliament) as State President on August 20, 1988, the uprising against the BSPP government intensified.

On September 10, 1988 in yet another hastily-reconvened Congress, the BSPP decided to hold 'multi-party elections' and the next day the Pyithu Hluttaw passed a resolution to hold multi-Party elections 'not earlier than 45 days and not later than 90 days'. However massive demonstrations in Rangoon and the rest of the country continued, demanding for the resignation of the BSPP government led by Dr Maung Maung in favour of a neutral interim government in order to supervise multi-party elections. On September 18, 1988 the State Law and Order Restoration Council (SLORC or na wa ta), led by the army Chief of Staff General Saw Maung (d. July 1997) took over after crushing what is now known as the failed 8888 Uprising of August 8, 1988. The BSPP re-formed itself as the National Unity Party (NUP - Taing-yintha Silone Nyi-nyut-yay Party or ta sa nya) on September 24, 1988.[1] At the May 27, 1990 elections the NUP contested in virtually all the constituencies but won only 10 out of 485 seats in the new National Assembly which the SLORC and its successor State Peace and Development Council (SPDC or na a hpa) never convened. The NUP Chairman from September 1988 until his death in early 2005 was U Tha Gyaw, a former army officer who later served as a Minister in the post-1974 BSPP government.[1]