A demonstration or street protest is action by a mass group or collection of groups of people in favor of a political or other cause; it normally consists of walking in a mass march formation and either beginning with or meeting at a designated endpoint, or rally, to hear speakers.

Actions such as blockades and sit-ins may also be referred to as demonstrations. Demonstrations can be nonviolent or violent (usually referred to by participants as "militant"), or can begin as nonviolent and turn violent dependent on circumstances. Sometimes riot police or other forms of law enforcement become involved. In some cases this may be in order to try to prevent the protest from taking place at all. In other cases it may be to prevent clashes between rival groups, or to prevent a demonstration from spreading and turning into a riot.

The term "demonstration" to refer to processions and mass-meetings has been in use since the mid-19th century.[1] Demonstrations are a form of activism, usually taking the form of a public gathering of people in a rally or walking in a march. Thus, the opinion is demonstrated to be significant by gathering in a crowd associated with that opinion.

Demonstrations can be used to show a viewpoint (either positive or negative) regarding a public issue, especially relating to a perceived grievance or social injustice. A demonstration is usually considered more successful if more people participate. Topics of demonstrations often deal with political, economic, and social issues.

There are many types of demonstrations, including a variety of elements. These may include:

Protest marches and demonstrations are a common nonviolent tactic. They are thus one tactic available to proponents of strategic nonviolence. However, the reasons for avoiding the use of violence may also derive, not from a general doctrine of nonviolence or pacifism, but from considerations relating to the particular situation that is faced, including its legal, cultural and power-political dimensions: this has been the case in many campaigns of civil resistance.[2]

Some demonstrations and protests can turn, at least partially, into riots or mob violence against objects such as automobiles and businesses, bystanders and the police. Police and military authorities often use non-lethal force or less-lethal weapons, such as tasers, rubber bullets, pepper spray, and tear gas against demonstrators in these situations. Sometimes violent situations are caused by the preemptive or offensive use of these weapons which can provoke, destabilize, or escalate a conflict. Foolish behavior by undisciplined police officers in full view of numerous video cameras was in evidence during the Occupy Wall Street Wp→ demonstrations in September, 2011,[3] see Anthony Bologna Wp→. Similar brutal behavior in 2010 by a police officer in Tunisia sparked a revolution, see Tunisian_revolution#Sidi_Bouzid_and_Mohamed_Bouazizi Wp→

As a known tool to prevent the infiltration by agents provocateurs,[4] the organizers of large or controversial assemblies may deploy and coordinate demonstration marshals, also called stewards.[5][6]

Oppressed people used mass protest demonstrations extensively in 2011 igniting the Arab Spring Wp→, popular rebellions overthrowing the governments of Tunisia, Egypt, and mounting massive demonstrations in other Arab countries such as Yemen, Bahrain, and Syria.[8] In Europe there were demonstrations by young people in Greece, Spain, and London; a tent city populated by young people was set up in Israel. In the United States there were massive protests in Madison, Wisconsin, 2011 Wisconsin protests Wp→, and a small group of activists began a demonstration in September on Wall Street which began to attract some labor support on October 5.[9] The Occupy Wall Street protest, after a month, was supported by the leadership of the AFL-CIO.[10] 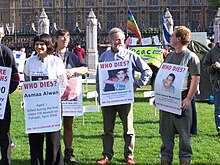 Demonstration in front of the British parliament

Under the Serious Organised Crime and Police Act 2005 and the Terrorism Act 2006, there are areas designated as 'protected sites' where people are not allowed to go. Previously, these were military bases and nuclear power stations, but the law is changing to include other, generally political areas, such as Downing Street, the Palace of Westminster, and the headquarters of MI5 and MI6. Previously, trespassers to these areas could not be arrested if they had not committed another crime and agreed to be escorted out, but this will change following amendments to the law.[11]

Human rights groups fear the powers could hinder peaceful protest. Nick Clegg, the then Liberal Democrat home affairs spokesman, said: "I am not aware of vast troops of trespassers wanting to invade MI5 or MI6, still less running the gauntlet of security checks in Whitehall and Westminster to make a point. It's a sledgehammer to crack a nut." Liberty, the civil liberties pressure group, said the measure was "excessive".[12]

The First Amendment of the United States Constitution specifically allows peaceful demonstrations and the freedom of assembly as part of a measure to facilitate the redress of such grievances. "Amendment I: Congress shall make no law ... abridging ... the right of the people peaceably to assemble, and to petition the Government for a redress of grievances."[13]

A growing trend in the United States has been the implementation of "free speech zones," or fenced-in areas which are often far-removed from the event which is being protested; critics of free-speech zones argue that they go against the First Amendment of the United States Constitution by their very nature, and that they lessen the impact the demonstration might otherwise have had. In many areas it is required to get permission from the government to hold a demonstration.