Material from Victor Serge, Year one of the Russian Revolution 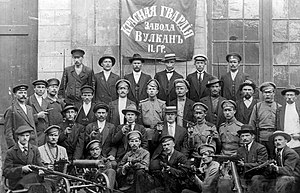 The initiative in forming the Red Guards in Petrograd came from the factory workers, who began it instinctively after the fall of Tsardom. In disarming the old order they had to begin to arm themselves. In April, two of the Bolshevik militants, Shlyapnikov[1] and Yeremeyev, began to put the spontaneous organization of the Red Guards into a systematic shape. The first regular units, if they can be called such, of’ this workers’ militia were formed in the outlying proletarian districts, principally in Vyborg. The Mensheviks and S-Rs tried, at first, to oppose the movement. At a closed session of the Soviet held in June, when they still had a majority, the Social-Democrat Tseretelli demanded the disarmament of the workers. He was too late. Proletarian command units had now been set up in every ward, and these were co-ordinated by a General Staff Headquarters for the city. Formed on a factory basis as a volunteer army – it was not individual workers but the factory as a whole that took the decision to enlist together or form its own unit-the first Red Guard detachments undertook the duty of protecting the great working-class demonstrations. During the July riots the Vyborg section kept the troops sent by Kerensky at a respectful distance. At this time Petrograd had about ten thou-sand Red Guards.

In September [1917], the use of weapons was being taught in seventy-nine Petrograd factories. In a good many factories all the workers carried arms. The military organization of the Bolshevik party could not find enough instructors for these masses. On the eve of the October rising, the Red Guard numbered 20,000 men, organized in battalions of 400 to 600 each divided into three companies, a machine-gun section, a liaison section and an ambulance section. Some of the battalions had an armoured car. Non-commissioned officers (workers) headed the battalions and the companies. Duties were performed on a rota system, with two thirds of the workers at their jobs in the factory at any time, and the other third ‘on guard’, with wages at their job rate paid for time on duty. The rules of the Red Guard required, for admittance, sponsorship from a Socialist party, a factory committee or a trade union. Three absences without excuse were grounds for expulsion. Infractions of discipline were tried by a jury of comrades. Unauthorized use of arms was an offence, and orders had to be obeyed without discussion. Each Red Guard carried a numbered identity card. The officers were elected; in practice, though, they were often selected by factory committees and other working-class bodies, with nominations for senior posts always submitted to the ward Soviets for approval. If the officers had not already received military training they were obliged to take special courses.[2]

It is worth remarking that this impressive initiative on the party of Petrograd’s proletariat was the fulfilment of Lenin’s own wishes in the urgent advice he gave in one of his Letters From Afar, written from Zurich on 11 March 1917 (24, Old Style). This advice was ignored at the time and the letter was only published later on as a historical document. In it Lenin discusses the ‘proletarian militias’ and appeals to the workers: ‘Do not allow the police force to be re-established! Do not give up your own local organizations!’ And form a militia without delay, including the women and the young people. ‘ Miracles of organization must be achieved’, he concluded.

In Moscow, it proved to be much harder to establish the Red Guard. The authorities, who were headed by S-Rs and Mensheviks, succeeded in virtually disarming the workers and part of the garrison. Grenades had to be manufactured in secret and explosives obtained from the provinces. The organization of the command and of communications was deplorably late. These weaknesses and delays were to cost the proletariat of Moscow a bloody street battle lasting six days.

The military organization of the party now numbered more than 100,000 soldiers and a certain number of officers. Out of this, Military Revolutionary Committees were to be formed every-where, the organs that directed the insurrection. -- From ch. 2 of the book.

Serge, Victor. 1930. Year One of the Russian Revolution. Translated from the French by Tony Sedgewick. Available free from marxists.org

This article is a stub. You can help Communpedia by expanding it.